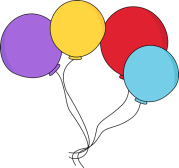 The 2014 Green Bean Kindergarten Curriculum Overview is Complete! Month 1-10 Lesson Plans are now updated, completed and now Aligned with the Common Core State Standards! I have designed these to be used as Public, Private or for Home School use! They are unique because they are created by me, a Kindergarten teacher and Curriculum Writer. They are based on how I have taught and still teach in the Kindergarten classroom- which is standards-based, as well as developmental-based. I have also weaved some Montessori methods into the construction of the order of teaching letters and sounds.

Since the emergence of the Common Core State Standards, I have re-vamped the Lesson Plans and made them better. I’ve caught errors and I ended up taking 2 years to complete the alignment of the first 8 months of school. So I have made them available on TpT. Each month can be downloaded by month or in a bundle, below. Just click on the link and it will take you to the TpT greenbeankindergarten little shop of mine! (However, the non-CCSS Lesson Plans of mine for Month 1-4 are still here on my blog for FREE. I never could find my jump drives with the other months, which makes me so sad. This is why I started placing my things on my blog and Tpt-since I lose jump drives so easily!) Month 8 Lesson Plans is a full month of Dr. Seuss themed lesson plans of Literacy, Math, Social Studies and; Science!!!!!!! Month 9 Lesson Plan Bundle (great for April) has great insect and animal activities weaved into each Literacy, Math, Science and Social Studies lesson.

Yep, that’s what I did on my day off and I loved it because I absolutely love to write and edit. Anyway, like my mom, I’ve moved some stuff around. But everything is still here and better organized. If you can’t find something, just ask me or use the search rectangle in the top right corner.

You may have noticed a new background, a new green bean logo and some new graphics……all from http://www.mycutegraphics.com 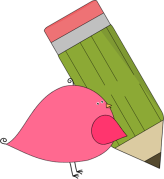 When I began teaching Kindergarten, my mentor, Ms. Wynn (the AP of my school) insisted that I use this one piece of curriculum: The Predictable Chart. After using it for just one week, I saw why. The repetition of the sentences encourages fluent reading and sight word recognition. It is also a quick mini-lesson that can take just 10 minutes/day!

The Predictable Chart is simply written in front of the children, as you go, and on Chart Paper. It is a great way to make sentences with the sight words that we are focusing on for the week. Later in the year, I type the sentences for the children to see on the Smartboard, and I have them type in their word to complete the sentence!

This is an example of a completed”Predictable Chart” that I did with my class. “I” and “like” were the sight words that we focused on in this chart. 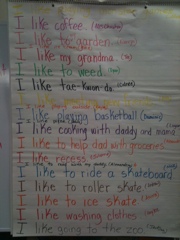 Day 1 – 3:  To begin, the teacher writes the sentence and lists what he/she likes. As you can see, I wrote: “I like coffee.” Then, I wrote my name in parenthesis. Then, I let another student say their sentence, as I write down exactly what he says, emphasizing spaces between words, letter formation, capital and lowercase differences and correct ending marks. This would take almost 30 minutes to go through a class of 20 students, so I go through 5-7 students each day, taking only 3 days for everyone to have a turn.

Day 4:  Children (or I) cut apart the sentences and words, for each child and  the children put their sentence back together again. I check it and if its correct, they can glue it to construction paper. Then they read the sentence.

Day 5:  I have them write their sentence all by themselves. This is a great way to see if they have learned to read the words, as well as write them. Then, each child illustrates their own sentence. When finished, they read their sentences to one another.

This is one of the first Predictable Charts that we did at the start of the school year. I made it interactive and had the children come up one by one and write their own first name. 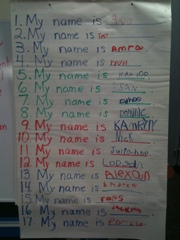 I usually do the Predictable Chart lesson at the end of my Phonics lesson. It is a good transition that goes right into my Literacy/Reading Lesson or Story of the day.

As I blog hopped over to some other great teachers, I found some more amazing examples of Predictable charts. You can even read the long version of the vital keys of P.Charts! http://mrsosterman.blogspot.com/2011/09/love-love-predictable-charts.html  and http://growingkinders.blogspot.com/2010/10/predictable-charts.html  and http://www.med.unc.edu/ahs/clds/files/how-to-handouts/PredChartWriting.pdf

“The Teacher’s Guide to Building Blocks” by Dorothy Hall [this is also the book that my mentor insisted I use as the foundation for teaching Kindergarten! It did help me alot, even though it looks outdated and lacking some elements. I still recommend it!]

Here are the questions and answers that you have been dying to know, but have been either afraid to ask or too busy to research (or you once knew and just plain forgot). As a parent or teacher of young children, you should become well versed in the story behind sight words and dolch words. Don’t worry….this will be easy reading and quick!

1. Why do children need to learn SIGHT WORDS? It is suggested that children should begin learning sight words prior to first grade and should be able to read most of the Dolch words by the end of third grade. These are typical expectations in many schools, to ensure fluency in reading.

2. Should sight words be “sounded-out”? No. They should be quickly recognized and read in under 3 seconds. Most of these words cannot be sounded out.

4. Are sight words or dolch words research-based? Yes. Edward W. Dolch, PhD, developed the Dolch Word lists based on research documented in his book “Problems in Reading,” published in 1948. There are 5 lists: Pre-Primer, Primer, First, Second and Third. The list for “Second” does not actually mean that those dolch words should be exclusively taught only in Second grade. It simply means that in Second grade texts (in the 1930’s/1940’s books), those words were documented more in Second grade texts.

5. Why do some curriculum’s or State Standards/Textbooks focus on certain sight words more than others. [(example 1: Kindergarten students in Alabama are expected to learn less sight words than those in Texas).(example 2: I am going on a whim here assuming that Houghton Mifflin vs. Pearson do not present the exact same set of sight words)]….I don’t know the answer to this, but this is a great question to ask your Reading Specialist or Curriculum Specialist! I presume that the arrangement of the timeline of when sight words are presented is based on the textbook, book or Emergent book order.

In the Green Bean Kindergarten Curriculum, I have arranged the Sight Words, based on the Dolch Words, combined with how the Emergent Readers are presented as well as the letters, Word Families and Rhyming Words. It is arranged smoothly for ease of learning.

“What are Dolch Words?” http://www.mrsperkins.com/what_are_dolch_words.html

After teaching about Antarctica, Penguins and Polar Bears during January-I moved on to teaching about brown bears. My students were devastated to say good-bye to the penguins, so my classroom is a mis-match of brown bears, polar bears and penguins! However, they are beginning to love these adorable brown bears too! I showed an adorable video of brown bears in Finland, via YouTube. There were bears climbing out of their den to join their mom on top. We were able to count the babies on top and on bottom. It was a great Math lesson introduction. Next, as a whole group, the children took turns to act out the video.They placed some of the bears ON the den and some of the bears IN the den. Next, in Math Stations, each child was able to make their very own bear den, complete with die-cut trees (I pre-stapled these). This is a simple brown lunch sack with 3/4 of it cut off. I crumpled it and cut out the archway, then taped it to a foam plate. The bears are counters from the classroom. When I send home the den, I will send bear die-cuts instead. 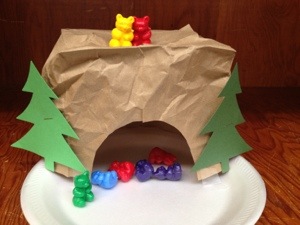 My Bear – “Look at this bear.” This sentence displays the sight words of the week that we focused on: LOOK, AT, THIS. Here, Dominic sounded out his own simple sentence next: “My bear.” I provided the shapes and each child made their own bear based on an example that I had already completed. 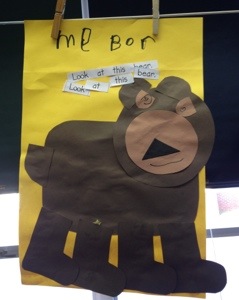 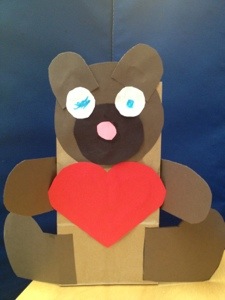 We viewed books and short YouTube video’s about brown bears. Then, using our sight words, each child was asked to verbalize what bears CAN do, LOOK like, and HAVE. During this activity, we also learned some new vocabulary words: fur and claws!

Math Time – This is the Bear OFF/ON Game. You simply drop a given amount of bear counters down. Then, count how many land ON the bear and how many land OFF the bear. If you had 5 to begin with and 3 landed ON and 2 landed OFF, then you could say: 3+2=5. This is a great way to introduce addition. Children love this game! 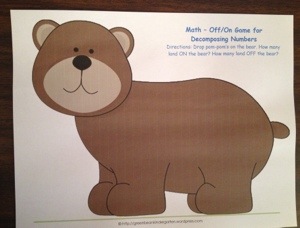 This is a Guided Reading Book, Emergent Reading Book and Sight Word Reader- all rolled into one!

Here is a cute little BEAR poem that I wrote. This is great for a Poetry station where children can read the large poem, then circle the sight words.

When we transitioned to the Forest and Brown Bears, this is one of the first activity comparisons we did- a Venn Diagram. We compared Animals and Objects in the Environment from the Forest to Antarctica. Suggestion: teach what the FOREST is before this lesson!

I never got to this, but something I wanted to do was to make classroom bear caves. How? Place blankets on top of tables and have children climb inside their pretend dens. In the story “The Bear Snores On,” all the animals ate popcorn and listened to party music-so why not do that too, right?